Allied Market Research Forecasts HDI PCB Market to Be Worth $22.6 billion by 2025 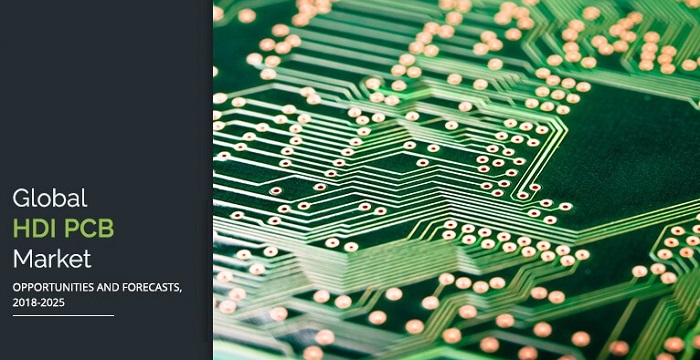 According to a recent report by Allied Market Research, the global HDI PCB market is expected to reach $22.6 billion by 2025, growing from $9.49 billion in 2017, at a CAGR of 11.1% from 2018-2025. The report provides detailed analyses of the top winning strategies, growth factors & opportunities, market size & forecast, major market segments, and competitive landscape.

Miniaturization of PCBs and increasing efficiency of consumer electronics drive the growth of the high density interconnect (HDI) PCB market. However, high construction cost impedes the market growth. On the other hand, increased utilization of HDI technology in automobiles would offer new opportunities to the market.

According to the report, the consumer segment contributed the highest share of 42% in 2017 and would maintain its lead throughout the forecast period. This is attributed to the high adoption of HDI boards in numerous consumer electronics devices including, laptops, smartphones, tablets and wearables, digital cameras and others. However, the industrial electronics segment would register the highest CAGR of 14.1% from 2018 to 2025, owing to the increased use of automation in the industrial sector. The report also analyzes automotive, IT & telecommunications, and other end users.

Smartphone & Tablet Segment to Lead in Terms of Revenue through 2025

Among applications, the smartphone & tablet segment accounted for nearly two-thirds share of the total revenue in 2017. The segment is projected to maintain its lead position through 2025. This is attributed to the growing use of smartphones & tablets globally. However, smart wearables segment would register the fastest CAGR of 14.2% from 2018 to 2025, owing to the increased number of smart wearables devices. The report also analyzes laptop & PC and others segments.

Asia Pacific held nearly half of the total market share in 2017 and would maintain its lion's share through the forecast period. China, India, South Korea, Japan, and Taiwan are the major consumers of HDI PCBs and HDI PCBs embedded devices in the Asia-Pacific region. In addition, the growth of this region is primarily driven by the presence of several large manufacturers of electronics devices. However, the LAMEA (Latin America, Middle East, and Africa) region would grow at the fastest CAGR of 14.6% from 2018 to 2025, owing to the high demand for cellular phones and use of HDI boards across various industrial sectors. The other regions analyzed in the study include North America and Europe.

Prominent players of the industry